Morning folks. As you know Friday marked the official end of the Asian tour as the squad flew directly back to London right after the game, arriving home in the small hours of Saturday morning. But, for us Gooners in Japan the tour came to its conclusion yesterday evening with a double header all-you-can-drink drunkstravaganza in Ikebukuro, Tokyo.

The level of planning for the event was really impressive, as was the turnout. It just goes to show that those who say that overseas Arsenal fans are somehow less of a fan, due to their geographic location, are talking out of their arse.

You could argue that the level of dedication needed to be an overseas fan is higher as games that are a lunchtime kick-off in England will start eight or nine hours later in Japan, 3pm games will kick-off at 11pm or midnight, 4pm games at midnight or 1am, 5:30pm games at 1:30am or 2:30am and finally the midweek 8pm games will start at 4am or 5am. I’d love to see how many of those that moan about overseas fans would consistently watch games which start at those times, especially when working the next day. 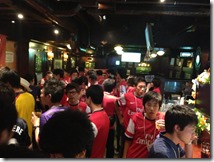 In attendance at the unofficial fan party was fan favourite, Maria Petri, who gave the crowd what they wanted – two songs. It’s really impressive that she made the trip to Japan, basically by herself. She’s a really nice woman and, considering she is now 74, you have to admire her dedication to all things Arsenal.

It has been a great few days to be a Gooner in the Tokyo area and an experience which many will remember for a long time to come. Here’s hoping that the club returns to these shores again next year as, while the tour can be regarded as a success, there is still plenty of room for brand and presence building in Japan. For purely selfish reasons, I’d love to see the team just do a tour of Japan next year and play friendlies in Osaka, Nagoya, Yokohama and Saitama. That would minimise long-haul flights and would allow the team to dedicate more time to proper training. Though I’m sure our Gooner friends in America will be hoping that the team begins trying to make an impression Stateside. However, I feel that there is a much greater scope for commercial improvement in Japan than America as football and baseball are the two biggest sports here.

This entry was posted on Sunday, July 28th, 2013 at 17:45 and is filed under Uncategorized. You can follow any responses to this entry through the RSS 2.0 feed. You can leave a response, or trackback from your own site.