Arsenal completed their Asia tour by lifting the Saitama City Cup with a victory over Urawa Red Diamonds at the Saitama Stadium in Urawa, Japan. The game was probably the most challenging of the tour and it would have given Arsene Wenger plenty to think about when deciding what state his squad is going to be in for the coming Premiership season.

Urawa brought plenty to this tight game and that was reflected by the 2-1 scoreline. Both teams gave a good account of themselves in the first half. The first meaningful shot came from the hosts in the 7th minute when Urawa midfielder Umesaki shot just wide after a lucky deflection off Jack Wilshere. Arsenal’s first clear chance came in the 8th minute. Decent buildup play from Miquel, Arteta, and Jack resulted in a low shot from Theo which came off the post. Urawa should’ve made it 1-0 in the 9th minute when the ball was hammered in low from the right, only to see their star man, Marcio Richardes, bundle it over. No doubt it was a massive let off for the Gunners.

In the 11th, Gnabry failed to capitalize on a mistake from a Urawa defender when he was clean through. He contribution was once again very good, though. Urawa were targeting Ignasi Miquel and one of several attacks on the right led to a shot just over by Ugajin. Arsenal had a great chance in the 26th minute and were starting to look a real danger. An attack, starting from Theo and then an Oxlade-Chamberlain dummy, led to a chance for Giroud on the right. However, instead of choosing the easier option of sliding it across to Gnabry, he chose to shoot. It went woefully over, much to the Frenchman’s frustration. This was followed by a lob on the run, again from Giroud, after a great pass from Arteta. 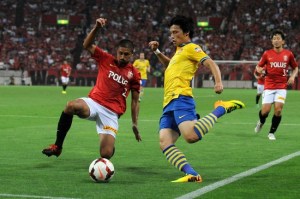 In the 34th minute, Oxlade-Chamberlain hit the bar after some uncertainly from the Urawa keeper, trying to palm away Mertsacker’s knock-on from a corner. Urawa threatened in the 43rd minute with a decent shot from Ugajin, again after pressure down the right. Fabianski pulled off a decent save which had a touch of the Hollywood’s about it, but Urawa were proving they were up for the fight.

The second half saw some changes with Ramsey, Jenkinson, Miyaichi, Podolski, and Rosicky coming on. The changes had an immediate impact. Arsenal went 1-0 up in the 46th courtesy of a Podolski volley. A deft trap backheel from Rosicky found Oxlade-Chamberlain, which was then received by the energetic Aaron Ramsey, who then found Theo with some space in the box. A little flick from Theo to Poldi was enough for the German to put the Gunners ahead.

Rosicky was a real menace with his driving runs. Ryo was trying his best to conjure something up, and he made a few runs at the Urawa right back. Unfortunately, despite his efforts, he was more Gerv than the Ronald side of the “-inhos”. Theo broke through in the 52nd minute, and he really should’ve done better with the one-on-one with the keeper.

Then came Urawa’s equalizer. Arsenal played zonal on a Urawa corner from the right. A lucky deflection dropped to Abe and he lofted it high to Fabianski’s right. There followed some Urawa pressure – Miquel caught out of position on the right saw two Urawa players beat the offside trap, leaving only Fabianski to come to the rescue. Arsenal looked a little shellshocked, and could well have given away a penalty when Jenkinson looked to have handballed in the box – Japanese commentator hilariously screaming: “hando!!” All protestations were waved away, however, especially from the Urawa boss going apeshit on the touchline.

It looked like Arsenal had lost a bit of command in the midfield, with Jack and Arteta being replaced at half time. Urawa were enjoying their best spell of pressure leading up to and after the goal, a Koscielny interception and a shot over just about keeping the scores level. 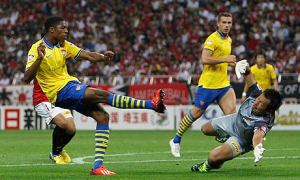 Arsenal needed to respond. The momentum returned when Oxlade-Chamberlain burst forward with a powerful run in the 66th minute, skipping challenges on the way, and finished it off with a low right foot shot hitting the post. Ox was replaced by the graceful wunderkind Zelalem in the 68th minute and the powerful Akpom replaced Theo in the 74th, both looking ever so slightly Brazilian in the stunning new yellow and blue away kit.

Then came Arsenal’s winner. A speculative ball in the 82nd minute found its way to a Urawa defender’s head, who tried to give it back to their unsuspecting keeper, resulting in it being palmed directly into the path of young Akpom. If there ever was a case of, “Here you are, sir. Would you like anything for dessert?” this was it. The youngster slid it in to the empty net, prompting the guy sitting next to me to sing “We’ve got Akpom. We’ve got Akpom. Who needs Suarez, when we’ve got Akpom?”

The last few minutes passed without much of a threat to either goal. Ramsey had a shot teed up by Rosicky and Sagna made a good interception on Richardes, which led to a run and shot from Ryo.

Wenger said at the end:

It was a very interesting game with a lot of commitment. And overall I think Urawa Reds played very well. We missed many chances but it was a good preparation for us.

So, mission accomplished for Arsenal – leaving Asia with a 100% record. Some good performances from young and old(er) alike. Hopefully the reception Arsenal got during this tour will persuade them to come back again. It was wonderful for the fans in Japan to get a glimpse of the team. Next stop the Emirates Cup. Come on you Gunners!

This entry was posted on Sunday, July 28th, 2013 at 02:10 and is filed under Uncategorized. You can follow any responses to this entry through the RSS 2.0 feed. You can leave a response, or trackback from your own site.