With games in Japan, Vietnam, and Indonesia, Arsenal’s global branding strategy couldn’t be any more obvious – world domination! Ok, not so much but it is certainly no coincidence that the Club are making positive inroads into this market, one which has possibly some of the most fervent and obsessed fans around. Preaching to the converted from afar works to a point but a lot of clubs are now actively pursuing the riches of the Asian market, knowing full well what rewards there are from capturing the imagination of young fans, as well as the importance of sealing sponsorship deals with locals brands.

The most successful EPL clubs have had a decent share of the market for a while in East and Southeast Asia, but when you spot middle-aged Japanese men sporting Man City shirts it’s hard to ignore that the Risk-like battle strategy for Asia’s football-related economic territory is clearly well underway.

In Japan, where baseball dominates and football comes a close second just above sumo and golf, there is a growing sense that one day “The Beautiful Game” may eventually take over as the most popular form of sporting entertainment. It seems football is pretty much consuming everything in its path, Borg style. So it’s not surprising that so many more people are turning to it, with top teams chasing the big bucks in emerging markets pretty much everywhere.

The momentum of Arsenal’s global brand, which sits 6th in revenue generated behind Bayern, Man Utd, Real Madrid, Barcelona, and Chelsea, shows no signs of slowing, and I for one as a Gooner living in Japan am relishing the idea of being able to see my team in the flesh, rather just the usual affair of silent fist-pumping celebrations at 1am, watching the game in a house with paper thin walls, unable to express excitement at a last ditch Kieran Gibbs tackle.

Not only are Arsenal making economic inroads and gaining broad coverage in Japan on a large scale, they are also tapping into the soccer school market too. This year for the first time, Arsenal will be bringing their brand of footballing expertise via a summer training camp, where young Japanese hopefuls will get to chance to be coached “the Arsenal way”. Obviously this doesn’t come cheap, with a five day course costing around £700 (this includes English lessons), but there’s no doubt that the training will be top class, and I am hoping this will be a regular feature over here for years to come (will give me enough time to save up for when my boy is old enough to join!).

Arsenal defeated Nagoya Grampus (Arsene’s old club) 3-1 on July 22nd, before facing Urawa Reds – “Japan’s Man Utd” today, July 26th. Hopefully Arsenal will make Asia, and especially Japan, a regular feature of their pre-season tour. Probably not the best preparation, having to travel half way around the world for a kickabout, but you get the sense that the Club clearly recognizes the potential of this financial goldmine. It’s whoever get a stronghold first. Come on you Gunners! 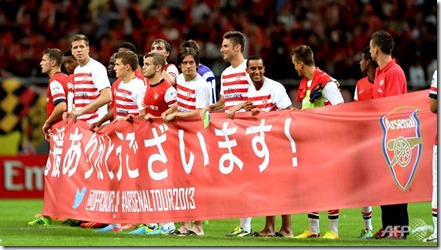 This entry was posted on Friday, July 26th, 2013 at 13:07 and is filed under Uncategorized. You can follow any responses to this entry through the RSS 2.0 feed. You can leave a response, or trackback from your own site.